Joseph A. Favazza is the 11th president of Saint Anselm College. He is popular among the students and the college com 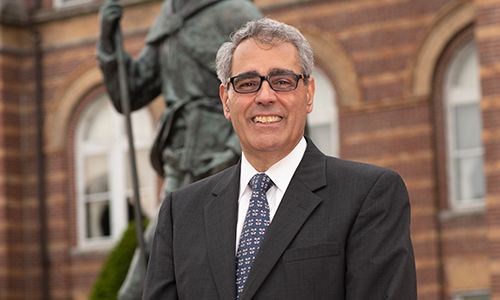 munity, and a leader in liberal arts higher education with an impressive track record in achieving critical academic and institutional goals.

Dr. Favazza began his career as a professor of religious studies at Rhodes College before becoming associate vice president for academic affairs and dean of the faculty. Prior to assuming his position at Saint Anselm College, Dr. Favazza was provost and vice president for academic affairs at Stonehill College, where he helped shape the college's intellectual culture. Among his accomplishments, Dr. Favazza guided the restructuring of the academic programs into the Thomas and Donna May School of Arts & Sciences and the Leo J. Meehan School of Business. He also led the development of targeted graduate programs, which he is doing at Saint Anselm as well, starting with a Criminal Justice 4+1 program and a Masters in Special Education.

In June 2022, Dr. Favazza announced the intention to create a School of Nursing and Health Professions at Saint Anselm College, which will be housed in a new state-of-the-art facility. He also led the creation of a home for the humanities on the campus with the Gregory J. Grappone ’04 Humanities Institute.

Dr. Favazza is a native of Memphis, Tennessee and is the son of Ambrose and Mary Russo Favazza. A first-generation college student, he earned a B.A. in history from St. Meinrad College in Indiana, and an M.A. and Ph.D. in Religious Studies from the Catholic University of Louvain, Belgium. He is published on a range of topics, from the ritual practices of forgiveness and reconciliation to fundamentals in academic leadership and pedagogy. His books include “The Order of Penitents: Historical Roots and Pastoral Future;” “Removing the Barriers: The Practice of Reconciliation;” “A Reconciliation Sourcebook;” and “From Cloister to Commons: Concepts and Models for Service-Learning in Religious Studies.”

Dr. Favazza's wife, Dr. Paddy Cronin Favazza, is an accomplished professor and researcher in the field of early childhood education. The couple have four children, including three adopted from Romania.