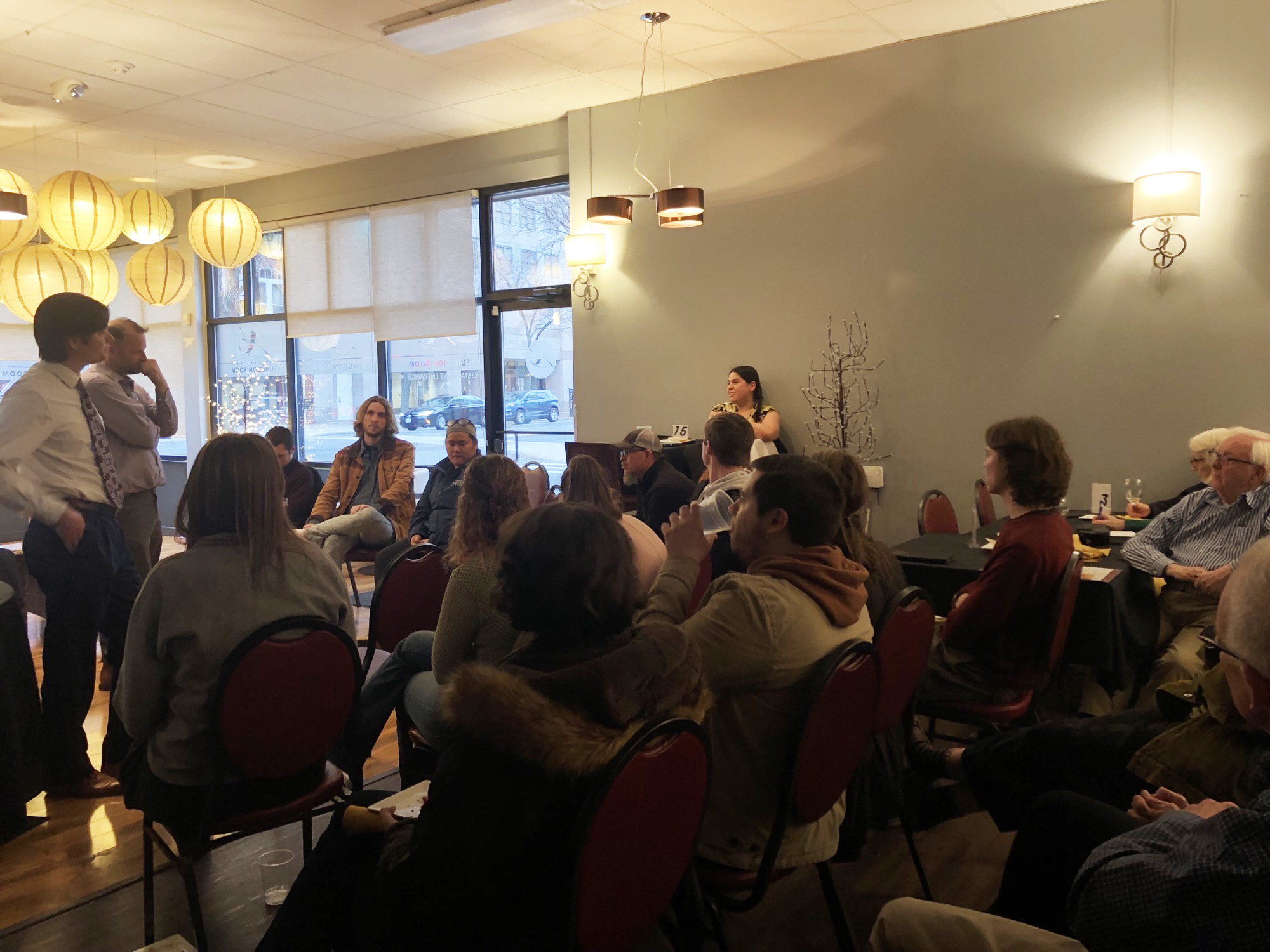 Written by Anders Larson '23, a Philosophy major and Center for Ethics student intern.

The Center for Ethics hosted its first Ethics Week on campus this year (April 4-8, 2022). The week consisted of four events: a Zoom discussion about willful blindness, a viewing and discussion of the movie Gattaca, a public discussion on whether war can ever be just at XO Bistro in Manchester, and an Ethics Circle discussion on campus about whether forgiveness can ever be wrong. The topic of the Ethics Circle discussion was also the Question of the Week, which was shown across campus with a QR code to a poll where students could weigh in on the issue.

Tom Bell, a speaker from England, virtually presented on the topic of willful blindness to Saint Anselm community members. He discussed how tension and fighting can be the result of conflict avoidance. He asked attendees whether they would willingly take a telescope that would allow them to see everything that is happening anywhere in the world, whether good or bad. Most said they would take it. But once they have knowledge like that, what is their responsibility?

The Gattaca movie night was led by Professor Tepley of the Philosophy Department and Professor Dabruzzi of the Biology Department. Discussion focused on the ethics of artificial zygote enhancement and selection. Most students who attended agreed that selection of zygotes can be wrong; some argued that it is sometimes ethical, while others argued it can never be ethical.

The XO Bistro discussion was well attended by both students and locals. The event kicked off with an introduction from the directors of the Center, Professors Latona and Sorens of the Philosophy Department. During the early stages of the conversation, several pacifist arguments were advanced, which in turn were met with opposing pro-war views. Some attendees argued that an appropriate balance of pacifist versus pro-war stances is necessary to achieve a just course of action. As the conversation developed, the situation in Ukraine was heavily referenced, with many attendees arguing that Ukraine has a right to defend itself in war.

The conclusion of Ethics Week 2022 took place in the form of a discussion in the St. Anselm Pub. The topic of discussion was whether forgiveness can ever be wrong. To begin the discussion, participants reviewed the results of the poll that had been available across campus throughout the week (47% of responses said forgiveness cannot be wrong, and 42% said it can be wrong). Participants were originally split, some arguing that forgiveness is always right, others arguing that it is right only conditionally. However, after an hour of discussion, definition, counter arguments, and clarification, the group was able to find common ground on the issue, finally agreeing that, given a certain definition, forgiveness is good so long as it corresponds to some previous reformation of an offender or anticipates a future reformation.

Overall, the Center’s first Ethics Week was a success: a week of provocative yet enjoyable and insightful ethical discussions attended by lovers of wisdom from a variety of backgrounds. Ethics Week will return next spring with hopefully even more events than before!