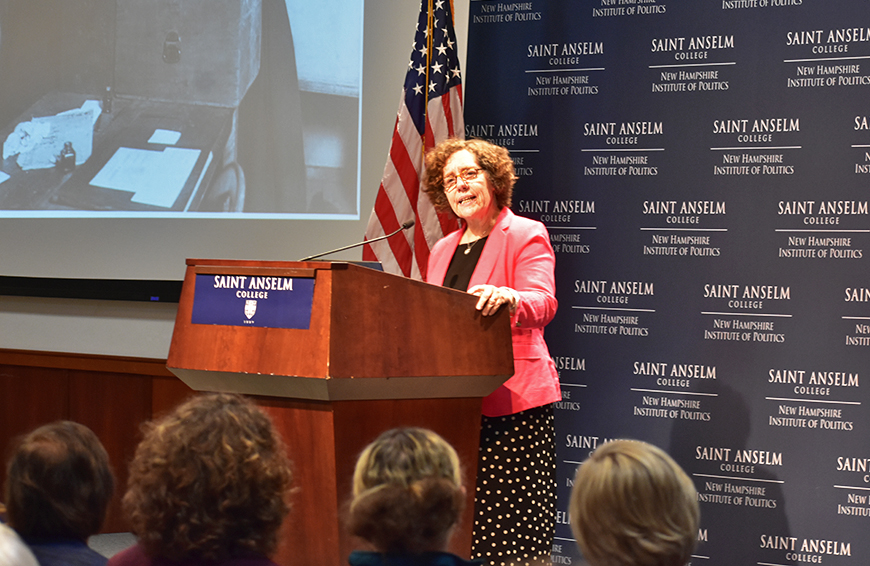 On Tuesday, September 10, the New Hampshire Institute of Politics (NHIOP) welcomed Elaine Weiss as part of the Bookmark Series to speak in honor of the 100th anniversary of the ratification of the Nineteenth Amendment. Weiss is a Baltimore-based journalist and author whose feature writing has been recognized with prizes from the Society of Professional Journalists. Her latest book, The Woman’s Hour: The Great Fight to Win the Vote, has been hailed as a “riveting, nail-biting political thriller.”

The Woman’s Hour: The Great Fight to Win the Vote is set leading up to Nashville in the summer of 1920. The ratification of the Nineteenth Amendment depended on Tennessee; many of the suffragists believed if they did not get Tennessee to ratify the Nineteenth Amendment, they might not get it at all. Weiss then backed up to the beginning of the suffragist movement providing context that the ratification of the Nineteenth Amendment took three generations of activists over seven decades. Weiss cited specific suffragists such as Elizabeth Cady Stanton and Susan B. Anthony as leaders of the movement. Women were holding meetings, having rallies, and conducting marches—which were not considered proper for a woman to do—in order to secure their natural political right to vote.

Weiss says suffragists would often have rotten eggs and spoiled vegetables thrown at them during their marches. Weiss also utilized political cartoons that anti-suffragists employed to portray suffragists as “she-men” or “not attractive.” Weiss also told the story of the arrest of Susan B. Anthony. In November 1872, Anthony casted her ballot in the Presidential Election, but women were prohibited of voting at this time. She was arrested, tried, and eventually found guilty of illegal voting.

In 1913, the suffrage movement took a turn. Women were willing to be rude, disruptive, and even break the law. A new leader had emerged in Alice Paul who formed the National Women’s Party, a more extreme party focused on getting the passage of a constitutional amendment. The National Women’s Party opposed President Wilson and picketed the White House in 1917. They were arrested and jailed; during this time, they were clubbed or chained to the wall. If they refused to eat, they would be force fed through a tube. Once released, these women created the Prison Special—a train tour where they dressed in a prison uniform and went to different cities across the country to speak about their time in prison.

Weiss then brings us back to Tennessee in 1920 where the ratification of the Nineteenth Amendment rests on a single vote of the youngest member of the legislature. Weiss does not spoil the story for us, but she leaves us with one final thought: “Social change is slow and political change is hard.”