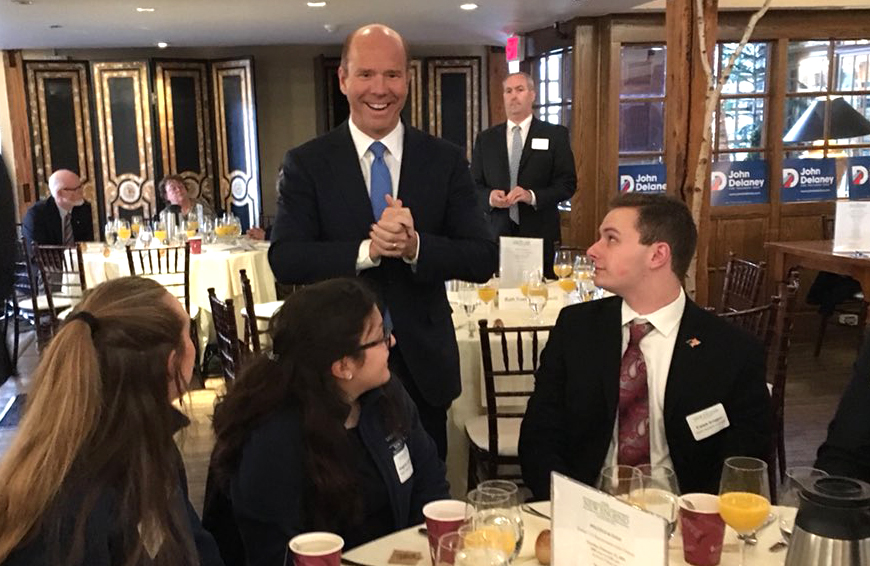 Former Maryland Congressman John Delaney spoke to a full audience at the Politics & Eggs breakfast on the morning of February 19.

Delaney, who announced his run for president in July of 2017, spoke about a wide array of issues and prefaced that he was the candidate of bipartisanship and pragmatism. He noted that the country needs to return to an era of cooperation and stressed his bipartisan qualities.

He was voted the third most bipartisan member of Congress during his tenure and called for bipartisan approaches to issues such as climate change, healthcare, education, and more.

Delaney called himself a “pragmatic idealist” who is prepared to offer solutions and compromise to all issues he would face as President. He condemned the growing political divide and stated that “elected officials have failed the American people by refusing to seek cooperation and compromises.”

His goals are ambitious as if he is elected, he intends to offer up a one hundred day bipartisan agenda in his first one hundred days in office as well as going to the House floor regularly to debate and consult with members on key issues.

In his closing remarks, the former Congressman called for “this divided nation to be brought together” and that the country must get back into the business of having moral aspirations in politics.

He directly appealed to young people and proposed a call to national service for individuals to go out into their communities and engage in acts of charity and public service. Public service is “an enriching experience” he stated and while society is changing, America must be prepared to chart out a course for the future.

This is not the first trip to New Hampshire for Delaney and will likely not be his last.