A Panel with Senators Hassan and Shaheen: The Infrastructure Act and Economic Fallout with the Russia-Ukraine Conflict 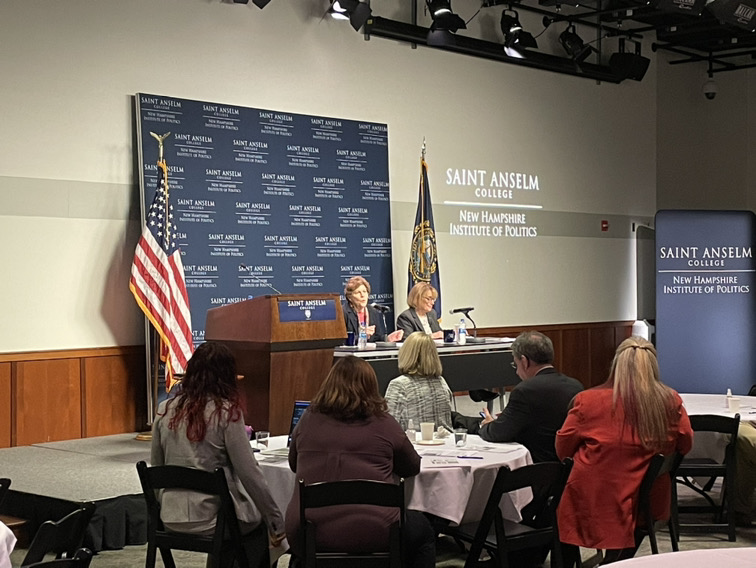 The New Hampshire Commerce Corridor hosted a panel event last week with Senators Hassan and Shaheen regarding the Infrastructure Investment and Jobs Act at the New Hampshire Institute of Politics.

The discussion was intended to apprise the members of Commerce Corridor of the recent infrastructure act and its impact on New Hampshire. The audience was joined, via Zoom, by several members of Senator Shaheen’s legislative team to discuss the funding and implementation of the act more in-depth.

During her opening remarks for the discussion, Senator Shaheen drew attention to the Ukraine and Russia conflict. She explained its significance to the state of democracies across the world. “In the last decade, democracies are on the decline and autocracies are on the rise,” said Shaheen. “People are looking at those choices and saying they want to be in a democracy.” She acknowledged the conflict would exacerbate the supply chain difficulties facing the country. She then initiated a call to the audience, saying, “we will need to think about what we will need to sacrifice for the future, the future of our country, and the future of western democracy.”

In the latter half of her remarks, Shaheen spoke on the infrastructure act citing it as the largest investment in her lifetime. She noted the importance of the Infrastructure Investment and Jobs Act, saying it is not only critical for families but critical to be competitive as a country.

Senator Hassan similarly commented on the Russian and Ukraine conflict, saying, “No one is safe from Putin if Ukraine isn’t safe from Putin.” She mentioned the economic impact the country will face from it, citing how her office will be working to decrease the prices of both gas and consumer goods. Regarding this, Hassan explained the act would serve as the foundation for economic growth across the country. The act will provide money for provisions that are of priority for granite staters, including ports, dams, waterways, and high-speed internet.

Shaheen’s legislative team presented several facets of the act and how they will be implemented in New Hampshire. These included the allocation of $351 billion to repair roads and bridges, $91.1 billion toward public transit initiatives, $55 billion in drinking water and wastewater infrastructure, and $65 billion in new broadband investments. Each of these provisions are to be divided amongst states in the coming months.

Of specific interest to the state is the Toll Credit Marketplace Act which “allows states to sell excess toll credits to generate new revenue and fund transportation projects. According to the New Hampshire Department of Transportation, the state currently has a balance of over $200 million in toll credits,” as laid out in the overview of the infrastructure act, handed out during the presentation.

Following the presentation was a Question and Answer session featuring participation from several members of the audience. The topic of most interest surrounded the lack of affordable housing in New Hampshire. An audience member noted that their employees struggling to find housing are not due to financial reasons but rather the lack of available housing.

In response, Hassan referred to the provisions within the act that would address this issue, saying the expansion of high-speed internet in New Hampshire will assist in the building and buying of homes, and the members of the housing development workforce will receive incentives through tax credits. Both Senators acknowledged the severity of the housing crisis that existed before the start of the Covid-19 pandemic.

In their closing remarks, both Senators thanked members of the business community in the audience for their continued support and leadership as the country approaches the perceived tail end of the pandemic.