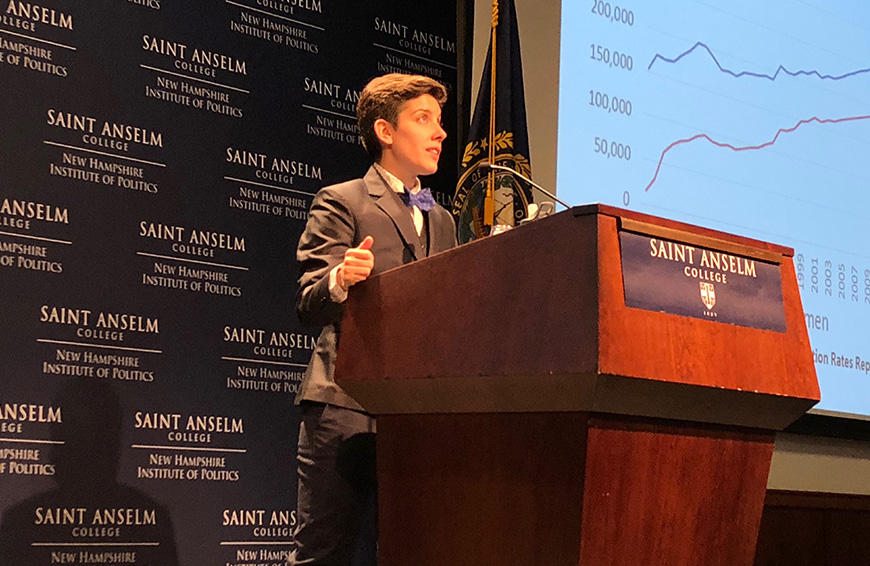 On April 2, the New Hampshire Institute of Politics (NHIOP) welcomed Dr. Elizabeth Sharrow to discuss how the public policy of Title IX shapes our understanding of sex and gender.

Dr. Sharrow is an Assistant Professor of Political Science and History at the University of Massachusetts Amherst. Her scholarship focuses on the politics of public policy, the history of Title IX of the Education Amendments of 1972, gender politics, college athletics in the U.S., and the politics of fatherhood.

Sharrow discussed in her lecture the many intricacies of Title IX, the original context of its founding, and the complicated legacy it has left in its wake.

Specifically, she highlighted the vast opportunities gained for female college students both in the classroom and in athletics, as well as its widespread support in public polling but can’t help being disappointed by other aspects.

To her great frustration, while classrooms have been integrated between men and women, the same cannot be said for sports. Sharrow argued, in athletic programs, men and women are treated differently, which she claims is part of an overarching stereotype of females being physically inferior to men.

This conception of women imposes significant limits on college age females, despite the gains that have been made on this front and until this barrier has been broken, women cannot be truly considered fully liberated on college campuses.

Sharrow closed her presentation with a request that people fight back against the stereotype that all female athletes are lesbian and called for the expansion of integration of sports beyond youth athletics.

In particular, Sharrow wants to see more opportunities for girls to participate in integrated teams at their discretion and to end the try-out exclusion for women to earn a spot on “men’s teams.”