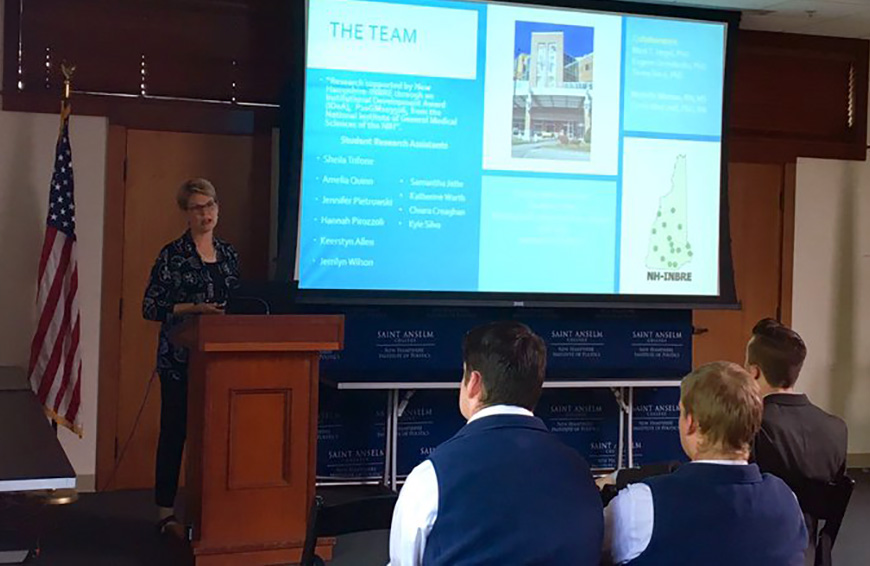 On September 20, Deborah McCarter, Ph.D., of the Saint Anselm College Nursing Department gave her lecture entitled “Effectiveness of an Electronic Nursing Intervention for Postpartum Women” at the New Hampshire of Politics (NHIOP). This lecture is the latest in the Institute’s Faculty Research Colloquium Series, a series that features the research findings of Saint Anselm professors in their current research endeavors.

McCarter is a registered Women’s Health Nurse Practitioner and is an International Board-Certified Lactation Consultant. She has worked at Beth Israel Hospital, Harvard Vanguard Medical Associates, Women and Infants Hospital, and Catholic Medical Center as a Registered Nurse. McCarter earned her Bachelor of Science in Nursing from Simmons College in 1979 and earned her Ph.D. from University of Massachusetts Lowell in 2007. She has been teaching courses in childbearing at Saint Anselm College since then.

McCarter’s research interests involve the effect of postpartum nurse intervention and its effect on postpartum depression.

In this spirit, McCarter’s lecture related to the effect of electronic communication intervention on postpartum women by nurses. In association with several doctors and nurses of Manchester, New Hampshire’s Catholic Medical Center, as well as in association with several former and current students attending Saint Anselm College, McCarter created an electronic system of communication between the Catholic Medical Center’s postpartum patients and nurse practitioners.

This system of communication was completely voluntary and for research purposes. The electronic messaging system sent a follow-up message to postpartum patients after they checked out of the hospital following childbirth, asking them if they would like to speak to a nurse practitioner for advice regarding issues of child health and maternal physical and psychological health, particularly with respects to postpartum depression.

The purpose of this experiment was to measure the electronic system’s effect on postpartum depression; particularly, the study focused on if women who received these standardized electronic messages from nurses for 6 months after birth had improved mood and decreased levels of stress and depression. To measure the effect of electronic intervention by nurses, McCarter created three groups with variables in effect: the first group included women who were provided with the usual care afforded by hospitals within two weeks after birth; the second group consisted of women who were electronically contacted by nurse practitioners asking if they had any concerns; and the third group consisted of women who were contacted by nurse practitioners and offered a follow-up appointment.

McCarter found in her study that the electronic messaging system had no effect on rates of postpartum depression among the women across the three groups. Characteristics of women who decided to accept the follow-up advice from nurse practitioners included women who had a history of depression, who gave birth via cesarean section, and who were not of a low-income status.

Although her study found no correlation between lowered rates of postpartum depression and use of the electronic communication system with nurses, McCarter has received positive feedback from women who participated in the study. One woman who participated in the study wrote McCarter a heartfelt letter, wherein she explained that being able to electronically communicate with a nurse practitioner gave her a feeling of safety in postpartum periods of incertitude.