Voting in America: Democrat or Republican? Or Neither? 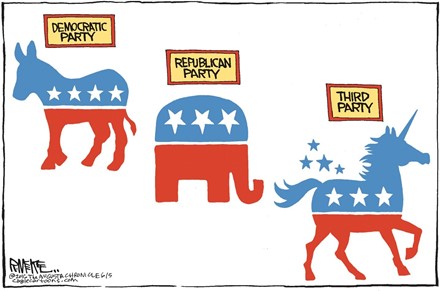 Many Americans today are faced with a very basic choice for who they want to vote for in a presidential election. Do they vote Democrat or Republican? This isn't how it has to be though. What if there was another option? That is where the smaller, third parties come into play. Not only do they have their own platforms and candidates, but oftentimes they are more representative of the public’s views. Throughout the past few decades, third party candidates have risen to some national prominence and even gained large percentages of the national popular vote. In the 2020 Election, there are multiple different options to vote for, not just Donald Trump and Joe Biden. Third party candidates offer an alternative to the mainstream while still pushing for important issues and policies.

Third parties have risen to prominence throughout important stages in United States history. When Former President Theodore Roosevelt separated himself from the Republican party in 1912, he formed the Progressive “Bull Moose” Party which granted him over 27% of the popular vote. In 1968, former governor of Alabama George Wallace ran under the American Independent party to be a conservative, anti-war candidate. Wallace received 13.5% of the national popular vote. The most recent third-party candidate to garner above 5% of the national popular vote was Ross Perot’s 1996 bid for President under the Reform Party, which won him 8.4% of the vote.  As a note, Ross Perot also ran in 1992 as an independent candidate and gained almost 20% of the national popular vote prior to his creation of the Reform Party.

In the 2020 Presidential Election, there are two smaller parties that are running candidates in enough states to possibly secure the 270 electoral votes necessary to win the presidential nomination. The Libertarian Party nominee, Jo Jorgensen, and the Green Party nominee, Howie Hawkins, have endured and emerged victorious from their party’s nomination process and primaries. Jorgensen and Hawkins are listed on ballots across the country, but even in states where they are not, Americans have the option to write in their name on the ballot.

The Libertarian Party of the U.S. is a laissez-faire, anti-intervention, pro civil liberties party that spends much of its efforts pushing for the independence of every individual from government. They are often regarded as a classical liberal party in the sense that members are opposed to the interference of any government in day to day life of citizens. The Green Party of the U.S. is a progressive, left-wing political party that calls for environmental policies and green politics to be brought to the forefront of government. They are seen as an eco-socialist party that pushes for social justice and environmental reforms to protect the planet.

Third parties can be a viable option for voters in elections, but many argue that they can act as an enemy of the two major parties. In election years where a third-party candidate gains a large enough national following, they often pull voters from whichever one of the major parties, Democrat or Republican, that they are closest to in ideology. This was the case in 1912 with Teddy Roosevelt and the Progressives pulling voters from the Republican party as well as Ross Perot doing the same with the Republicans in 1996. This led to the Democratic candidates in both races winning with a large share of the vote. Third parties play a significant role in who wins the presidential election as they give voters an alternative option to vote, but sometimes at a cost for the two major parties.