Friday, April 30 through Sunday, May 2 marked the performance weekend of The Anselmian Abbey Players’ production of Macbeth, performed outdoors on the rugby field due to Covid-19 restrictions. 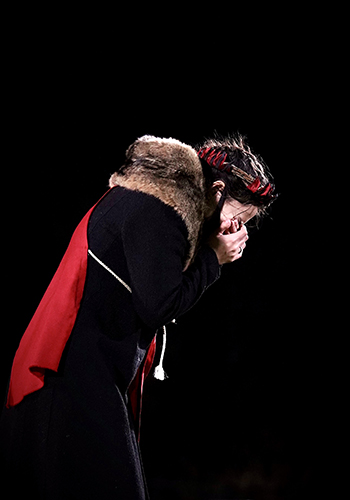 “Macbeth,” written by William Shakespeare, is a famous tragedy about a man and his wife whose ambitions lead them to commit regicide in an attempt to take over the Scottish throne. The play was just one of several performances the Abbey Players performed this academic year despite the many challenges caused by Covid-19.

Performing outside in only marked-up grass, the Abbey Players also experimented by performing in a theatre-in-the-round format, with the audience completely surrounding the stage.

“’Macbeth’ was terrific,” says English Professor Ann Holbrook. “It was beautifully blocked out in the round, with the players moving in circles so that all the audience could see them from different vantage points at various times.”

It was the first time in recent history that the Abbey Players used this style of performance. Nicole Sherwood acting as Lady MacBeth was unsure of performing outdoors in a theatre-in-the-round setting but quickly found some benefits. “It was certainly a learning curve that we all had to adjust to, and it turned out much better than I had thought it would,” she says. “I liked the immersion of having the audience on all sides because it added a closeness to the performance, an intimacy that you don't usually get if you're performing on a regular stage.” 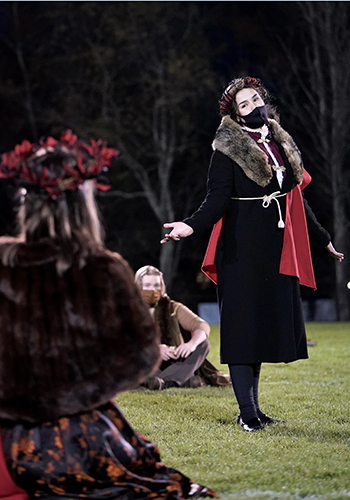 “The show went wonderfully,” said Theatre Professor Daniel Bird Tobin, director of the Abbey Players. “The work students did at all levels, from performing to costuming to stage management and beyond was incredible. They overcame every obstacle and truly worked together to create a beautiful piece of theatre. I’d echo that sentiment for the entire year. We did 10 different events this year, and they all went smoothly and successfully due to the terrific work of the students involved.”

In addition to the end-of-academic-year performances, the players also presented one final show for their parents, family, and friends on Saturday, May 22.

“It was wonderful to be able to share this production with our families, who were all just so glad to be there,” says Sherwood. “It was truly the perfect ending to this process, and I think it was our best show overall.”

The cast of this production are as follows: