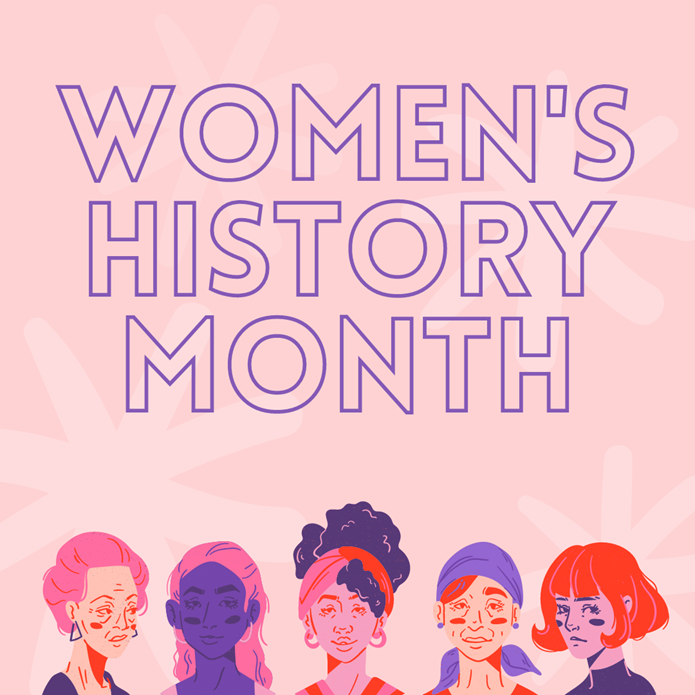 This year's Women’s History Month was influenced by the saying: “from first to equal” as many of the month’s events focused on women in the workplace, feminism, and media portrayal. On March 24, Human Resources and the Center for Intercultural Learning and Inclusion hosted a brown bag lunch panel on Zoom. The theme for this discussion was “Nevertheless She Persisted by Overcoming Challenges and Finding Opportunities” and Molly McKean, executive director of human resources facilitated the panel.

The guest speakers of the panel included Xiorli Bernazzani ’99, a managing partner at Bernazzani Law, Susan Gabert ’91, assistant dean of students and director of campus ministry, Nickie Lora ’06, associate director at the Meelia Center, and Professor Deborah McCarter, of the college’s nursing department. During the discussion, the panel of women recommended motivational books to read, offered words of wisdom, and mentioned how to combat societal struggles of gender roles while staying true to yourself.

The panel included women of many diverse backgrounds. All the women offered valuable advice for women in the workplace, young women, and guidance on finding oneself. Firstly, Sue Gabert who is the first female director of campus ministry on the college campus comes from a familiar line of Saint Anselm graduates as both of her children have graduated from here as well.

Gabert stated that men tend to apply above their skill set, whereas women tend to apply to their skill set or below. She graciously said how it is important to “listen but with the ear of your heart” because you will always be a forever learner, you are learning from everyone around you to create a space in which there is not a sense of false hierarchy."

“Take on those tasks, take risks, and trust yourself,” says Gabert.

Nickie Lora who is the director of the Meelia Center on campus claims how “society tells us to accept the status quo” as she advises young women to build relationships, take some time to yourself, and believe that change is possible. also states how it is also important to remind yourself of past successes and to stay true to yourself.

Lastly, Deborah McCarter is a professor of Nursing at the college with a focus in maternal health. She advises: “You don’t have to plan your entire future today.” Create time for yourself and live in the moment.

Out of the women, Xiorli Bernazzani’s background as a native Spanish speaker and attorney was captivating as this was her first communal college panel and she is the only alumnus on the panel who does not work at the college.

Bernazzani was born and raised in Venezuela. She immigrated to the United States in the late 1980s and became a United States citizen in January of 2006. Bernazzani met her husband her freshman year on the Hilltop. They have been together for over 25 years and they have four children. They have an interesting working dynamic as her husband is also an attorney at Bernazzani Law; however, it remains owned and operated by Xiorli Bernazzani.

Notably, Bernazzani was interested in the Women’s History Month event as she strives to be a motivational person. She believes “nevertheless she persisted” sums up her life and that she would not be where she is today without persisting. Specifically, being of Hispanic descent and in a predominantly male career as a lawyer, it becomes apparent that she has been persisting her whole life to achieve her goals.

When asked, “What were some of the challenges you overcame as a woman?” Bernazzani stated, “There is the expectation that the woman is going to continue to do the things at home that she would normally do if she was not working” such as enjoying being home, being with the children, and helping her children with school. Bernazzani continues how there is an “underlying expectation as a mother, while also being the breadwinner and as a woman you feel guilty, you feel like you need to please everyone else” like your children, husband, staff, clients, and “we [as women] forget to take a moment for ourselves,” said Bernazzani.

Throughout the panel, Bernazzani provided valuable and noteworthy advice that she often shares with her children. The first one being “always give 110%, for women that is particularly important, if you only do 100% and that's what a man is doing, you’re going to be outspoken.” Specifically, she mentioned how women need to try harder to always be ahead of the pack. She also said that the average person only gives about 75%-95% and more than that is required to be the best you can be.

Secondly, Bernazzani states that “it takes a lifetime to build a reputation and a second to destroy it” and when she explained this, she said that “you are the greatest thing, but if you do one thing wrong that’s all anyone will ever remember–reputation is everything.” She carries this throughout her own life as she continually progresses and persists. As a mother, she wants to teach her children to persevere and continually persist no matter the outcome– much of what women throughout history have done.

Xiorli Bernazzani is a great example of Anselmian spirit and encourages women to go above and beyond. She is currently in the process of creating a podcast as a way to “network” and allow for her knowledge to have a greater audience as she talks about topics she is well-versed in like that of being a female business owner, attorney, wife, and mother.