When Natalie Bender was finishing her junior year, she pitched an idea to Professor Molly Lozeau of the Fine Arts Department. As a child, Bender performed in the Manchester Community Players' production of “Amahl and the Night Visitors,” a one-act opera telling the story of the Magi’s journey. She thought the show could be performed at Saint Anselm College, and Professor Lozeau suggested the performance should be done as Bender’s senior thesis project. 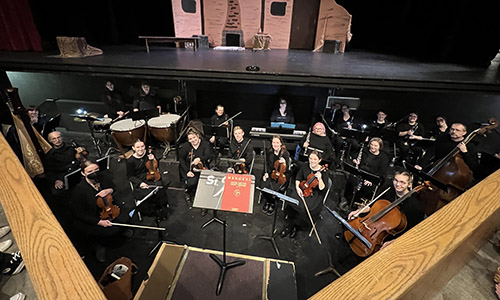 Fast forward to December 4 and Bender co-produced the college’s first opera in the Dana Center for the Humanities, “Amahl and The Night Visitors” by Gian Carlo Menotti. The performance featured professional opera singers, and a full orchestra, and was in collaboration with faculty, staff, students, and alumni. Professor of Music Sean Parr, Ph.D., co-produced and directed the show with Bender. Professor Lozeau coordinated rehearsals with student instrumentalists and also played piano for chorus rehearsals and in the orchestra.

As soon as she arrived on campus in the fall of 2022, Bender started to prepare for the show. As co-producer, Bender was responsible for playing in the orchestra pit, coordinating the ensemble, choreographing, and designing costumes, props, and sets.

"Amahl and the Night Visitors" is a one-act opera beloved by generations of Americans for its simple majesty and childlike charm. Composed by Menotti in 1951, the opera tells the fictional story of a young peasant boy named Amahl and his widowed mother who receive an unexpected visit one night from the Bethlehem-bound Three Kings. While sweet, humorous, and profound in its plot and depth, "Amahl" also serves as a historic intersection between popular culture and the arts as the first opera ever composed specifically for television.

Bender’s goal was to create a production where parents could bring their children and not be scared of what they would see. After three months of intense planning, the show’s performance was a success!

“Someone called it ‘refreshing’ and people laughed,” said Bender. “When the kids think it’s funny, that’s when you know it is successful. We got the kids to laugh.

“I feel incredibly humbled and excited that I get to have the experience,” said the fine arts and Great Books double major. Most people wouldn’t be able to have this at other colleges. The one-on-one attention you get from faculty members is special. I didn’t know it [the performance] would be so different for the college. I have received a lot of support. The professors get extremely excited for me and the production, and it is an irreplaceable feeling.”

Having discovered a passion for the arts at an early age, Bender studied violin and ballet growing up and later ventured into the worlds of competitive Irish dance, community theatre, sacred choral singing, and, most recently, viola. She currently sings soprano in the college choir and participates in the chamber music program on campus. Upon graduation she hopes to work as a secondary school teacher and play violin and/or viola in community ensembles.

The production was co-sponsored by the Richard L. Bready Chair in Ethics, Economics, and the Common Good and the Fine Arts Department. "Amahl and the Night Visitors" by Gian Carlo Menotti presented under license from G. Schirmer Inc. and Associated Music Publishers, copyright owners.