September Happenings at the NHIOP

The school year kicked off with the Granite State Debates in partnership with WMUR, featuring the Republican candidates for U.S. Senate, Congress, and Governor. Kevin B. Harrington Student Ambassadors supported all four congressional, senate, and gubernatorial debates working closely with the members of the WMUR crew. Students watched as the production and set took shape and then aired on television. 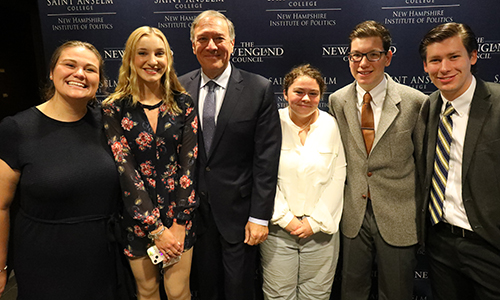 The Institute's Politics & Eggs series co-hosted with the New England Council, brought several well-known politicians to campus from late summer into the early fall including former Vice President Mike Pence, former Secretary of State Mike Pompeo, and Governor of Maryland Larry Hogan. These gentlemen spoke with business and community leaders about issues they believe are critical to our nation. A few lucky ambassadors attended and worked behind the scenes in organizing the events.

Among students, the ambassadors hosted their first Finding a Common Ground about student loan forgiveness. Events committee co-chairs Caroline Mara '24 and Hannah Ross '24 led the discussion about the Biden Administration's newest plan to relieve student loans up to $20,000. Finding a Common Ground is a student-led, student-only discussion about topics important to ambassadors.

One of the most exciting weeks for the ambassadors is Civic Engagement week which began with Cake and Constitution Day in the Jean Student Center Complex. Ambassadors served cake and handed out pocket constitutions. Students and faculty also voted on student-submitted Constitutional amendments. The winner was an Equal Rights Amendment. 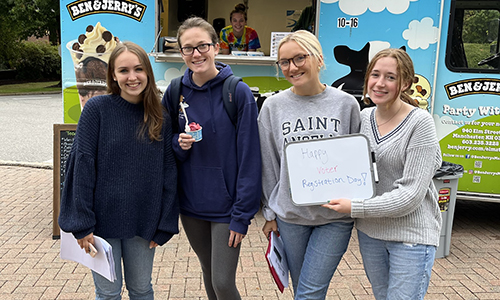 National Voter Registration day on September 20, found students serving Ben & Jerry's ice cream and handing out information on voter registration to the student body. It was a popular event outside of Alumni Hall as students gathered around the ice cream truck eager for a sweet treat.

Wrapping up Civic Engagement Week, Dr. Russell Murihead, a professor of democracy and politics at Dartmouth College, presented "Belief in the Legitimate Opposition" the history of partisanship and the importance of unity in U.S. politics. He closed with the current implications of political opposition in the United States. After his analysis, Dr. Murihead answered questions from the audience and took part in the NHIOP's "All Hours" podcast which can be found on Spotify.

Lastly, the ambassador program celebrated its co-chairs, Maeve McAllister and Grace Tierney who have big plans for the upcoming year ahead. The entire ambassador group is eager to continue planning exciting events for the remainder of the semester and welcome new ambassadors to the Institute in January.