Conducting research is a central part of studying history. Research experience makes our graduates attractive job candidates and helps them with admission to graduate programs in history and other fields. The History Department offers a variety of research opportunities, including assignments in our classes, paid research assistant positions, internships, and as part of student/faculty research grants.

For more information about research opportunities and policies, visit our Advising Resources page.

History and American Studies Majors at Saint Anselm are able to participate in a variety of research opportunities. These are offered as assignments in the classroom, paid research assistant positions, as part of student/faculty research grants, and more. 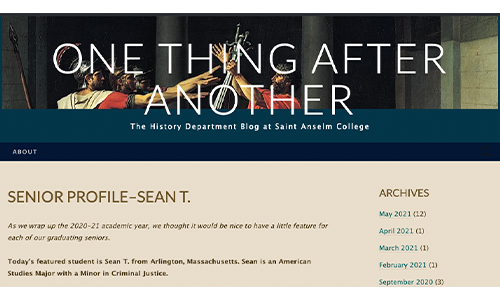 Visit One Thing After Another