Raised in Queens, New York, Dr. Steven DiSalvo graduated from Fordham University, where he earned his bachelor’s degree in his psychology and his doctorate degree in educational leadership. He served as president of Marian University from 2010-2013, and is on the board of national higher education committees such as the National Association of Independent Colleges and Universities. Dr. DiSalvo’s term at Saint Anselm was distinguished with rising enrollment, graduation, and retention rates, as well as the advancement of the national reputation of the college, and the construction of the new Roger and Francine Jean Student Center Complex. He is now the seventh president of Endicott College in Beverly, Mass. 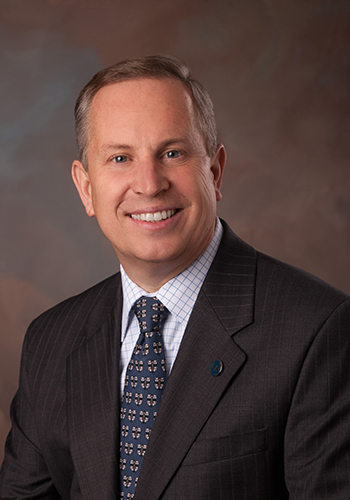 Father Jonathan came to Saint Anselm from Bristol, R.I., as an English major and graduated in 1969. He was ordained as a priest in 1974. He taught theology and served as dean of students, assistant to the academic dean, dean of freshmen, and associate director of Campus Ministry. As president, he led the college's last capital campaign, which raised more than $50 million, oversaw expansion of buildings and facilities, and supported the transition to a new governance model.
Portraits (Spring 2013) "24 Years of Anselmian Leadership" 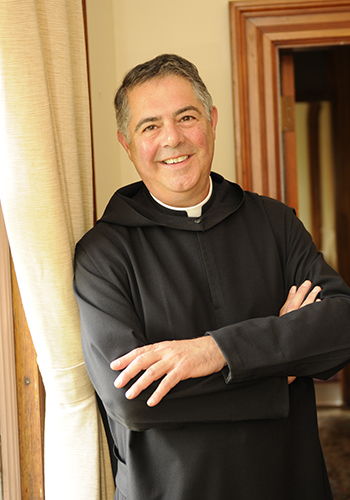 Born in Naugatuck, Conn., Brother Joachim graduated from Saint Anselm in 1966 and earned a Ph.D. in economics at Catholic University of America. He chaired the department of economics and business at Saint Anselm and at age 35, became president of the college. During his presidency, Poisson Computer Center, Carr Activities Center, Davison Dining Hall, and student apartments were built; the college celebrated its centenary with a Victorian picnic; Saint Anselm hosted presidential primary debates for the first time; and the Administration Building became Alumni Hall. Post-presidency, he served as superintendent of schools for the Diocese of Manchester and headmaster of Woodside Priory School. In later years, he was president of Loras College in Dubuque, Iowa and Elms College in Springfield, Mass. He died in 2003 at age 59. 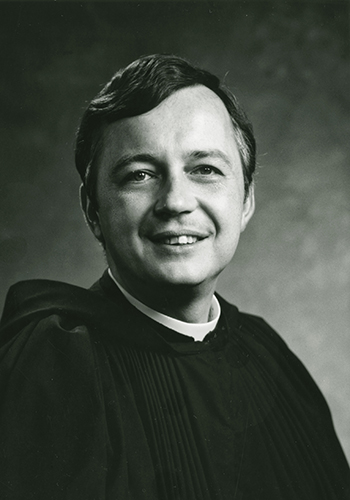 A native of Manchester, he entered Saint Anselm Abbey in 1938 and graduated from Saint Anselm in 1943. He chaired the college's math department and left to serve as an Army chaplain in Korea and Japan. Retiring with the rank of captain, he returned to the college, where he served as academic dean and executive vice president. He also was prior of the abbey. On Nov. 14, 1973, he announced a foundational change in the college: the decision to admit women to the liberal arts program. Twenty-six women enrolled the following year. Father Brendan died in 2000 at age 80. 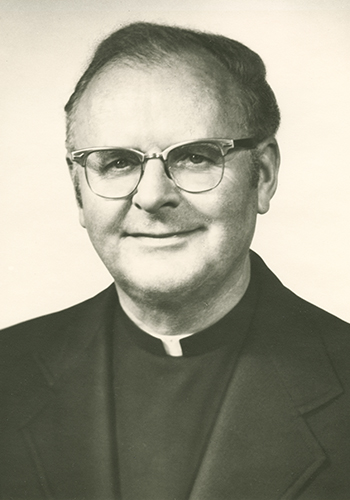 A native of Concord, N.H., he became a member of the Saint Anselm Class of 1942. He entered the Order of Saint Benedict at Saint Anselm and became a monk in 1943. Three years later, he was ordained to the priesthood and joined the Saint Anselm faculty, where he taught philosophy and theology. He also attended Pontifical Institute of Medieval Studies at the University of Toronto and earned a Ph.D. in sacred theology from the University of Ottawa. Before his appointment as president, he served as assistant registrar, assistant to the dean, assistant to the president, and dean. Father Placidus saw the campus through anti-war demonstrations in the 60s; pushed for the start of a hockey program; and helped develop the "Portraits of Human Greatness" humanities program. He served on many state boards and committees and helped to found the New Hampshire College and University Council. Post-presidency, he served as treasurer at Woodside, a dependent priory of Saint Anselm Abbey. He died in 2005 at age 84. 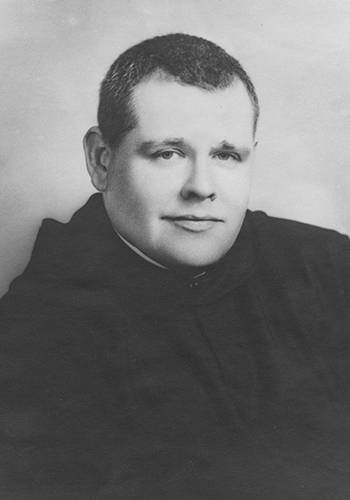 A native of Lowell, Mass., he studied mathematics and philosophy at Saint Anselm, graduating in 1936. He studied for the priesthood at the Collegio di Sant Anselmo in Rome, and obtained a Ph.D. in philosophy at the University of Toronto. He was ordained at Montecassino (Italy) in 1939. He taught at Dartmouth College and Saint Anselm, and served as Saint Anselm College's dean for 13 years. He also served as vice president for development, continuing the period of growth that began in the late 50s. The nursing department, which he supported as dean, was formally established during his presidency and the college entered into a cooperative engineering program with the University of Notre Dame. In 1967, Father Bernard became treasurer of the college. The Father Bernard Holmes, O.S.B., Scholarship (which provides full tuition for the recipient's senior year) was established by Mr. and Mrs. Robert C. Davison in his memory. He died in 1996 at age 82. 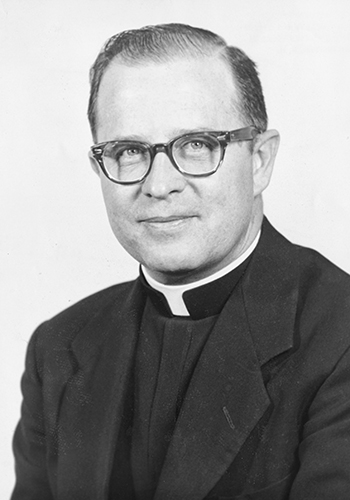 A native of Holyoke, Mass., he attended Saint Anselm on a basketball scholarship. He entered the abbey after two years of college, graduated in 1936, and was ordained to the priesthood in 1939. He pursued graduate studies at Catholic University and the University of Toronto and served as a U.S. Air Force chaplain during the Korean Conflict. After serving as chair of the sociology department and executive vice president, he was appointed to lead the college. Under his presidency, the college formed its first advisory board of trustees (also called the lay board) and undertook its first capital fund campaign. This led to the construction of six buildings (dedicated in 1960), and an increase in enrollment. He became the second abbot of Saint Anselm Abbey in 1963 and oversaw the construction and consecration of the Abbey Church. He retired from his abbatial duties in 1971 and died in 2000 at age 87. 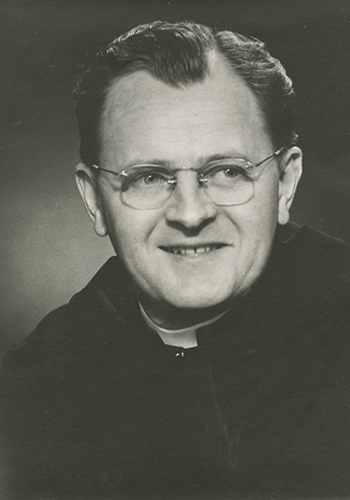 Born in Cambridge, Mass., he professed as a monk of Saint Mary's Abbey in 1907 and was ordained in 1911. He served as a lieutenant in the Chaplain's Corps with the American Expeditionary Forces in France during WWI. A director of the college, he became the first abbot of Saint Anselm Abbey. He sent monks to graduate studies, allowed laymen to join the faculty, reinstituted football, and discontinued the prep school. He led the college through the Depression years and a period of low enrollments during WWII. During the war, he allowed the Army Air Corps to conduct a pre-flight cadet program on campus. He discontinued the monastery's farm after the war. 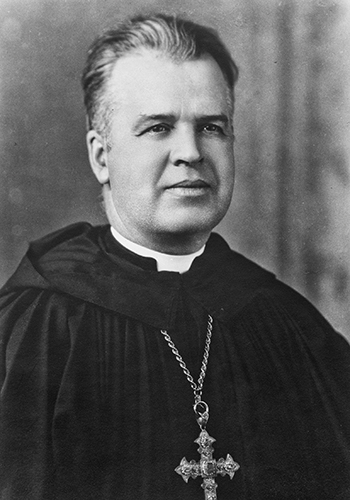 Born in Newark, N.J., he was ordained in 1884 at Saint Vincent's Archabbey in Latrobe, Penn., and transferred vows to Saint Mary's Abbey in N.J. He studied philosophy and theology at Saint Vincent's College in Penn. and in 1910 was elected to succeed Abbot Hilary. Under his presidency, the college's gymnasium wing, monastery building (now Joseph Hall), and chapel wing were completed. He agreed to Saint Anselm Priory becoming an abbey (elevated in 1927) and presided over the abbey's first abbatial election, the election of Abbot Bertrand Dolan, O.S.B. He died in 1937 at age 78. 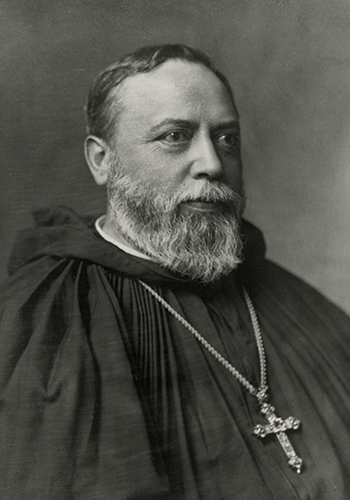 The founding president was born in Butler, Penn., and ordained in 1866 at Saint Vincent's Archabbey in Latrobe, Penn. He earned a doctorate at Sapienza Universita di Roma and taught theology and was director of Saint Vincent's College until becoming abbot of St. Mary's Abbey in Newark, N.J. At the request of the Right Rev. Denis M. Bradley, Bishop of Manchester, he established Saint Raphael's Parish in Manchester, N.H. He incorporated the Order of Saint Benedict in New Hampshire and purchased land for the college. After fire destroyed the brick structure months before the school was to open, he decided to rebuild. The college opened in 1893, and eventually included a preparatory school as well as a college program. To increase enrollment, he allowed advanced seventh and eighth graders to attend. He lived at the college from 1900-1905. 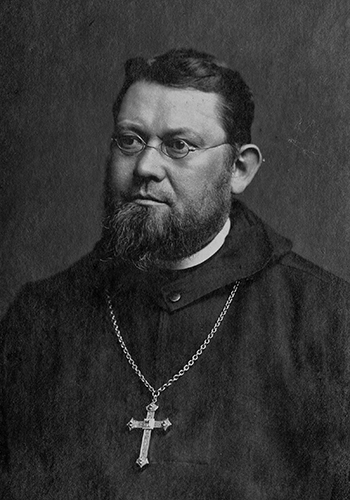